By Richard Barrington, CardRatings Contributor Updated, February 17, 2021
Our credit card articles, reviews and ratings maintain strict editorial integrity; however we may be compensated when you click on or are approved for offers (terms apply) from our partners. How we make money. 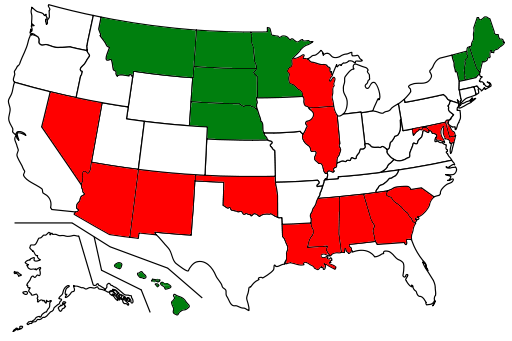 Some people get into credit trouble no matter where they live, but credit conditions are clearly worse in some states than in others. Do you live in a state with good or bad credit conditions?

Here are some examples of how much factors that affect credit can vary:

To weigh the various factors that affect credit conditions, CardRatings looked at the following data for its annual Best and Worst States for Credit Conditions study:

Based on ranking all five of the above factors and then averaging those rankings for all 50 states plus the District of Columbia, the following are the 10 best and worst states for credit conditions.

The best states for credit conditions - 2018

These states showed the strongest credit conditions in this year's study:

1. North Dakota. This is no fluke - economic conditions in North Dakota have been consistently strong for several years now. This year, North Dakota ranked no worse than fourth nationally in any of the five measures of credit conditions used in this study. It, therefore, maintained its 2017 top position as the best state in the country for credit conditions. Ranking unchanged from 2017.

2. Vermont. Having the nation's second-lowest bankruptcy rate and finishing among the 10 best states in each of the five credit categories helped Vermont edge up by one position from last year's survey, into second place. Up from third place in 2017.

3. South Dakota. The Dakotas narrowly missed repeating last year's sweep of the first and second spots. Like its neighbor to the north, South Dakota has demonstrated strong credit conditions for several years now. It finished in the top 10 in four out of five categories this year, including having America's lowest foreclosure rate. Down from second place in 2017.

4. (tie) Hawaii. A strong job market helps households keep their credit on strong ground, and at 2.1 percent as of March Hawaii had the lowest unemployment rate of any state. Overall, Hawaii finished in the top 10 in four out of five categories. Up from ninth place in 2017.

4. (tie) Minnesota. This neighbor to the Dakotas seems to share many of their strong credit characteristics. Most notably, having the highest average credit score in the nation helped Minnesota repeat its fifth-place overall standing from last year. Ranking unchanged from 2017.

6. New Hampshire. One pattern that emerged in this year's study is that there are two geographic clusters of states where credit conditions are strong: the upper Midwest and northern New England (Hawaii is the only outlier in the top 10). New Hampshire is solidly better than median in each of the five credit categories, including tying North Dakota for the second-lowest unemployment rate. Ranking unchanged from 2017.

7. Nebraska. This state was better than median in all five categories, including having the nation's fifth-lowest unemployment rate. Ranking unchanged from 2017.

8. Montana. Despite dropping four slots from last year's ranking, Montana still made the top ten overall primarily on the strength of having America's fourth-lowest foreclosure rate. Down from fourth place in 2017.

9. (tie) Maine. The strongest credit characteristics of this state are having one of the five lowest rates for both unemployment and bankruptcies, and Maine ranked better than most states in all five categories. Ranking unchanged from 2017.

9. (tie) Wisconsin. Having the nation's lowest credit card delinquency rate helped Wisconsin climb three spots since last year to crack the top 10. Oddly enough given its generally strong credit characteristics, Wisconsin does have a higher bankruptcy rate than most states. Up from 12th place in 2017.

The worst states for credit conditions - 2018

This would normally be a bottom 10 list, but because of a three-way tie for the eighth-worst score, there are a dozen states that make the list of places with the worst credit conditions:

51. Nevada. Unfortunately, it seems the casinos are not the only place in Nevada where people gamble with their finances. Nevada has had poor credit conditions since this study was first conducted in 2011. Nevada was worse than median in all five categories, including landing in the bottom 10 in four out of those five. Down from 49th place in 2017.

50. Georgia. On average, people in this state have the third-lowest credit rating in the nation, and the state also has the third-highest bankruptcy rate. Ranking unchanged from 2017.

49. Alabama. Problems in this state include having the highest bankruptcy rate in the United States, and the second-highest rate of credit card delinquencies. Up from 50th place in 2017.

47. (tie) Mississippi. Oddly enough for a state with generally poor credit conditions, Mississippi has one of the country's lowest foreclosure rates. However, this is more than overcome by having the lowest average credit score and the highest rate of credit card delinquencies. Ranking unchanged from 2017.

47. (tie) Louisiana. As with neighboring Mississippi, Louisiana's chief problems are a low average credit score and a high rate of credit card delinquencies. Up from 48th place in 2017.

46. Arizona. The primary problem in Arizona seems to be having one of the highest unemployment rates in the nation. Down from 38th place in 2017.

45. New Mexico. Though it did better than neighboring Arizona in some categories, New Mexico has an even bigger problem with unemployment. At 5.6 percent, the jobless rate in New Mexico is second-highest in the United States. Down from 43rd place in 2017.

44. Delaware. Delaware has the nation's second-highest foreclosure rate, and the tenth-highest bankruptcy rate. Down from 40th place in 2017.

43. Oklahoma. Both average credit score and credit card delinquency rate are among the 10 worst in the country. Ranking unchanged from 2017.

40. (tie) South Carolina. Somewhat surprisingly, South Carolina actually has a fairly low bankruptcy rate, but it is among the ten worst states for average credit score, foreclosures and credit card delinquencies. Down from 36th place in 2017.

40. (tie) Maryland. This state is worse than median in every category, with the worst characteristic being the third-highest foreclosure rate. Down from 39th place in 2017.

CardRatings has been doing this analysis since 2011, and over time there have been some dramatic changes - for better or worse - in the relative credit conditions of some states.

The following were the biggest gainers since last year's study:

Here are the states that had the biggest decline in the rankings since last year:

Your credit status is primarily a matter of personal decisions and circumstances. However, it is good to understand how sound credit conditions are in the area where you live, because this might affect the quality of life and business opportunities you encounter. 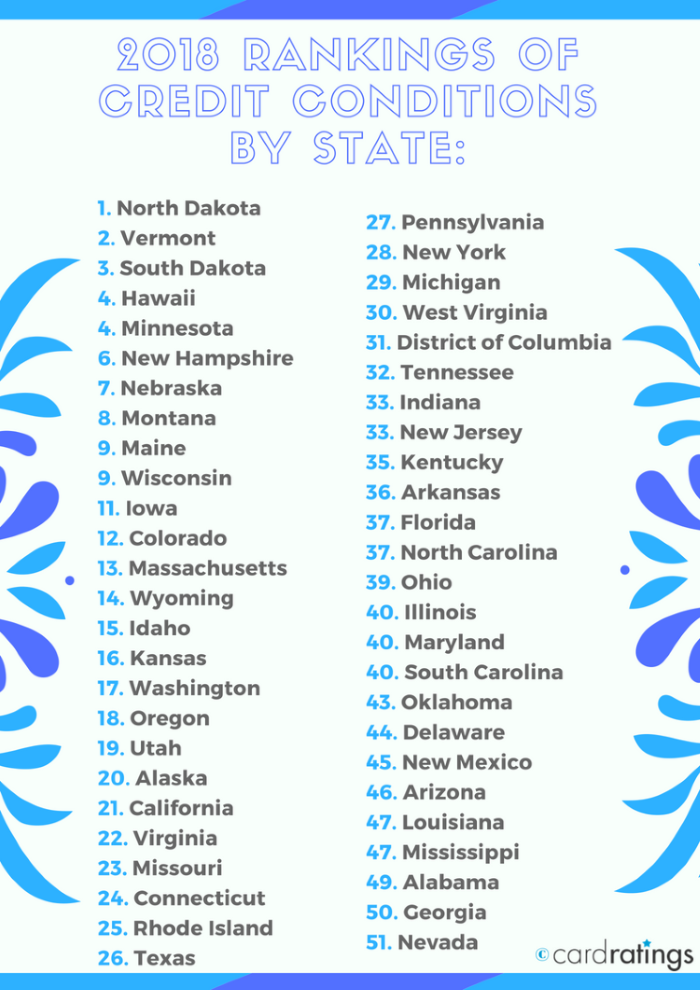 X
How is your credit?
Oops! Your credit does not qualify you for this card. Applying and being rejected for this card could possibly hurt your credit
We are redirecting you to offers you are qualified for based on your credit.
Click here to be redirected now.
720-850
Excellent
660-719
Good
600-659
Fair
350-599
Poor