By Richard Barrington, CardRatings Contributor
Updated, February 17, 2021
Our credit card articles, reviews and ratings maintain strict editorial integrity; however we may be compensated when you click on or are approved for offers (terms apply) from our partners. How we make money. 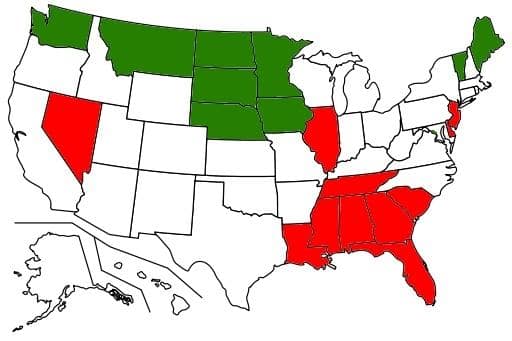 The pandemic has turned 2020 into a battle for both physical and economic survival. In each case, the strongest survivors may well be those that were in the best shape when the trouble began.

Research shows COVID-19 preys most heavily on those with preexisting conditions. Similarly, the economic burden may fall most heavily on households with the weakest credit standing going into this year.

The 2020 CardRatings.com annual study of the Best and Worst States for Credit Conditions identifies the states where consumers seem best positioned to weather the economic storm, and those where consumers may be most vulnerable.

Certainly, there are some big differences in conditions from state to state:

These differences take on added significance in an election year, so CardRatings also looked at how credit conditions might impact electoral math.

Ranking the best and worst states for credit conditions

To measure the combined impact on credit conditions, CardRatings.com examined the following factors:

Here are this year's 10 best states for credit conditions:

3. South Dakota. The strongest point for South Dakota is having the lowest foreclosure rate of any state, and it also finished among the 10 best in three other categories.

5. Montana. A seven-position jump this year put Montana squarely in the top 10, with rankings among the 10 best in three out of five categories.

6. Washington. This state ranked in the top 10 in three categories, including having the fifth-lowest average credit card balance as a percent of income.

7. Nebraska. The strongest attributes Nebraska had going for it in this year's study were top 10 rankings for low unemployment and high average credit score.

8. Iowa. The only category in which Iowa scored among the 10 best was for low average credit card balance as a percent of income. Also being better than median in the other four categories helped Iowa place in the top 10 overall.

10. District of Columbia. Washington, DC has a lower average credit card balance as a percentage of income than any state, and also did better than median in three other categories.

Here are the worst states for credit, starting with the worst state overall. Eleven states are listed here, because there was a tie for the 10th-worst position.

1. Nevada. The biggest gamble in Vegas might be ex10ding credit. Nevada is the worst state for credit conditions for the third year in a row because it ranked among the 10 worst states in all five categories.

2. Louisiana. Last year, Louisiana tied for second-worst, but this year it holds that distinction all on its own. This is because it ranks below median in all five categories, including having the nation's second-lowest average credit score.

3. Florida. After narrowly missing the bottom 10 last year, Florida couldn't escape it this year. That's because it was below median in all five categories, including being among the 10 worst for foreclosure rate and credit card debt as a percent of income.

4. Georgia. The good news is that this is a slight improvement after Georgia tied for being the second-worst state for credit conditions last year. The bad news is that Georgia is still among the 10 worst states in three out of five categories.

5. Alabama. This state has the highest bankruptcy rate in the nation, and the fifth-lowest average credit score.

6. (tie) Delaware. No state fell further in the rankings since last year than Delaware, which was 31st overall in 2019. The biggest cause for concern is the second-highest foreclosure rate in the nation.

6. (tie) Mississippi. Besides having the lowest average credit score, Mississippi is also among the 10 worst states for bankruptcy rate and credit card debt as a percent of income.

8. Tennessee. Having the second highest bankruptcy rate was the worst of Tennessee's problems, but it was also below median in every other category.

9. Illinois. Finishing among the 10 worst states in three out of five categories doomed Illinois to the bottom 10 overall.

10. (tie) New Jersey. New Jersey has the highest foreclosure rate in the nation, and with the second highest unemployment rate this problem may only get worse.

Kentucky showed the biggest improvement since last year, climbing 15 places to finish 25th this year. Most of its category rankings are little changed since last year, but the difference maker was that Kentucky jumped from 42nd to 1st for low unemployment.

This is based on the June, 2020 unemployment rate from the Bureau of Labor Statistics. As of this writing that is just a preliminary figure. Kentucky showed an unusually steep drop in Labor Force participation rate and a big jump in employment in June, both of which drove its unemployment rate down.

Pandemic conditions have distorted some of the government's data collection efforts, so it will be interesting to see whether Kentucky's low unemployment rate will hold up when the preliminary figures are finalized.

On the other side of the ledger, Delaware showed the biggest decline in overall ranking this year. What happened there? Somewhat the opposite of what happened in Kentucky. Delaware saw its unemployment rate rise much more than that of other states, such that it's ranking for employment conditions dropped from 16th nationally to 42nd.

The economic impact of the coronavirus pandemic has been felt most immediately in the job market. Thus it is no surprise that unemployment rates should be a big driver of changes in rankings since last year. Over time, weakness in the job market is likely to have a wider impact on other aspects of credit conditions.

Credit Conditions and the 2020 Election

Household finances of10 influence elections, and this may be especially true during a recession. So what impact might credit conditions have this time around?

Interestingly, states that voted for then-Democratic presidential candidate Hillary Clinton have improved their average ranking in this study since the last election, while those that voted for Donald Trump have slipped slightly.

That suggests people in states that are struggling might have a louder voice in the upcoming election than those that are doing well.