By Geoff Williams, CardRatings Contributor
Updated, December 2, 2020
Our credit card articles, reviews and ratings maintain strict editorial integrity; however we may be compensated when you click on or are approved for offers (terms apply) from our partners. How we make money. 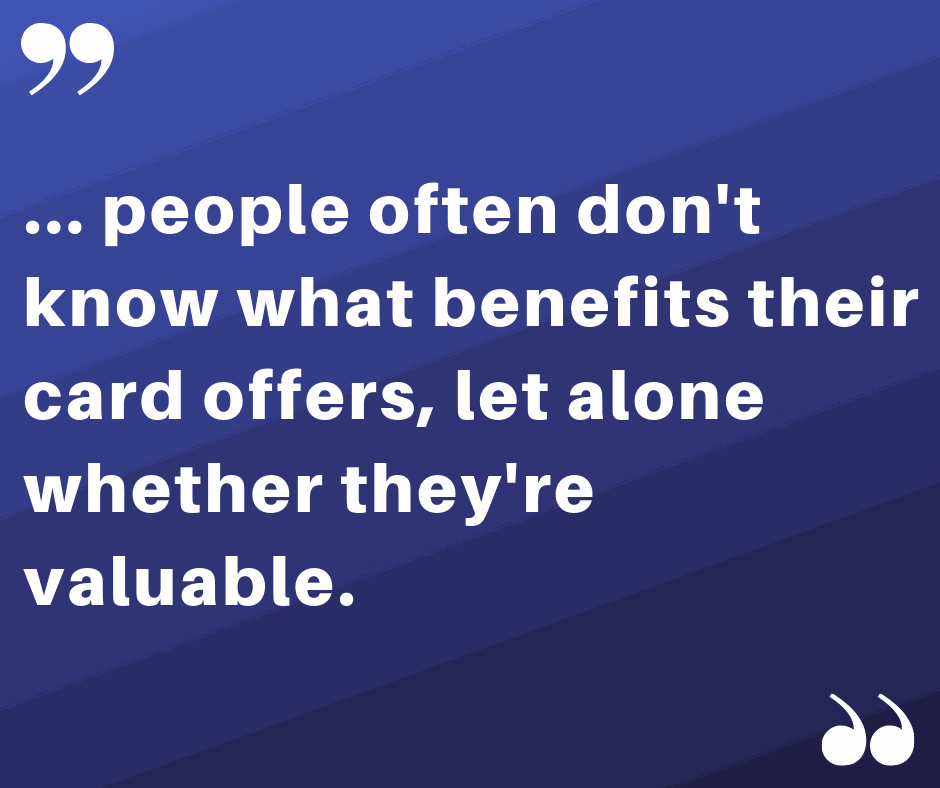 You've been told repeatedly: Read the fine print. Why? Because when it comes to a contract's fine print, it may not be fine at all. There may be something confusing or costly, like extra fees, hidden in a lot of legalese. But, if you're like a lot of credit cardholders, you could also be missing out on something great.

That's the conclusion CardRatings.com came to after surveying 200 cardholders for 10 different credit cards. (In other words, 2,000 cardholders total – 200 cardholders per card.) One of the questions asked was: "In the table below, select the benefits offered by your [credit card] and rate how much you value that particular benefit."

What the data reveals is that people often don't know what benefits their card offers, let alone whether they're valuable. In some cases, people rated "very valuable" to benefits that their particular card does not offer. In other cases, people didn't select a benefit as being offered at all when, in fact, they did have the benefit.

In turns out there's another reason to review the fine print, particularly in a credit card policy: You may miss out on something great. In fact, you might be losing money because you aren't aware of benefits that your credit card provides.

Credit cards advertising understandably focuses on rewards or the fact that they don't charge an annual fee, or maybe a low balance transfer fee or that there's an amazing introductory bonus for signing up. That's all important, but it can pay to be clear about the extras. Forgetting them, or misunderstanding what you have, could cost you money.

People often don't realize what perks they have

It is understandable why many people don't realize if their card doesn't have, say, trip cancellation or interruption insurance. First of all, not every card does have it. Many don't. Then if you have a card with trip cancellation insurance, chances are, a few years may pass before you do find yourself in a position where you need to scrub a vacation; therefore, it's easy to imagine that some cardholders find themselves losing hotel reservations and airfare and forget that their credit card could have reimbursed them.

However, it could be a costly oversight and MANY people are overlooking it.

And that could be a very costly mistake. You could lose money by canceling a trip and not getting any charges refunded from it. But also, you can spend unnecessarily on travel protection if you always buy travel insurances whenever you go on a big vacation or to a faraway destination, not realizing your card has it.

According to the travel insurance comparison website, InsureMyTrip.com, you can expect to pay anywhere from 4% to 10% of your total pre-paid, nonrefundable trip cost. So if you wind up buying travel insurance when you have it on your credit card, you could potentially waste hundreds or thousands of dollars.

How much not understanding credit card perks could cost you

Let's imagine a hypothetical cardholder who does utilize all of the benefits offered by his credit card. We'll call him John Smith.

John carries Chase Sapphire Reserve®; we're not saying you should get that card, but it's a good card for this hypothetical since it has most of the benefits that were mentioned in the survey. Let's take a look at how much many of a credit card benefits would typically cost to purchase separately.

Trip insurance. As we mentioned, typically you're going to spend 4%-10% of the cost of your vacation on trip insurance. So maybe John is taking his family to Europe, and they're spending $5,000 on airfare. By relying on his credit card's trip insurance, he is saving $200 to $500 to cover just the airfare for his trip. He'll be saving a LOT more if he does have to cancel his trip for a covered reason and is reimbursed for that airfare.

Auto rental insurance. Typically, you can expect to spend $10 to $30 a day for a collision damage waiver, a form of insurance that car rental companies often ask if you want. It may not sound like too much, but if you're driving for, say, a week, you can see how that adds up. So let's say John and his family are spending a week in Europe. By using his Chase Sapphire Reserve®'s auto insurance, and assuming he would have spent $20 a day for car rental insurance, he might have saved $140 over a week of driving. And it's very believable that many people don't realize that their own credit card has auto rental insurance. For instance, in CardRatings' survey, 78 out of 200 Chase Sapphire Reserve® users did not select auto rental insurance as a feature their card offers, though it is clearly outlined in the card's Guide to Benefits.

Free access to your FICO score. Many credit cards now offer free FICO scores, and banks and lenders often will give consumers free access. So this perk may not seem like much – but it's still nice, when you dig and realize that paying for access to your score will cost you $20 to $25 a month. By using his credit card's free access to this credit score instead of paying for it, John is saving more than $200 each year.

Many cards have the auto rental insurance, free access to your FICO score and some form of lost luggage insurance. But some credit cards also have amenities such as airport lounge access, travel charges reimbursement and/or Global Entry or TSA Pre✓® application fee reimbursement. As a Chase Sapphire Reserve® cardholder, John enjoys complimentary airport lounge access. It's hard to say how much that would save him on a single trip, but if John and his family get free drinks in the lounge and don't have to pay for overpriced sodas at a restaurant, that could be worth $15 bucks at least (let's assume this is a family of four). On a larger scale, if you generally prefer to avoid the hullabaloo of the standard airport terminal and would be purchasing a lounge membership annually, that annual membership can set you back hundreds of dollars. If you don't know that your card offers complimentary access, therefore, you might end up wasting a decent amount of money. Even so, a full quarter, or 50 out of 200, of the Chase Sapphire Reserve® cardholders surveyed did not mark "airport lounge access" as a benefit offered by their card.

Another money-saving benefit many cardholders don't seem to realize they have: Global Entry or TSA Pre✓® application fee reimbursement. TSA Pre✓ is a government program that allows travelers who are vetted and deemed a low risk by the Transportation Security Administration to pass through security at domestic airports more quickly than non-vetted individuals. Global Entry is a U.S. Customs and Border Protection program that pretty much does the same thing, only it offers this speedy option for travelers domestically as well as when they arrive in the United States from abroad.

What are a credit card's most valuable features overall?

In some ways, this is in the eye of the beholder, or cardholder. It may save you a fortune to use your car's trip cancellation and interruption service, but if you don't go on many trips, or you never cancel or interrupt one, it may not seem like a very valuable feature. But , objectively, it is valuable. Both Chase cards in the survey, the Chase Sapphire Preferred® Card and Chase Sapphire Reserve®, for instance, will reimburse you for your expenses up to $10,000 per person and $20,000 per trip for pre-paid, non-refundable travel expenses paid to your card. Obviously, terms apply in these scenarios.

But in some ways, one of the best perks may be one we have mentioned yet: luggage reimbursement.

It's pretty rare that an airline loses your luggage, according to a 2012 Air Travel Consumer Report issued by the U.S. Department of Transportation. Three lost pieces of luggage out of 1,000 passengers, back then, was considered typical. Still, if you're the passenger who has those three bags, or one of them, you're going to be relieved if your credit card has luggage reimbursement. As for how much you'll be reimbursed, that can vary. For instance, with the Chase cards, you'll get reimbursed up to $3,000 per passenger, whereas with The Platinum Card® from American Express, generally it's between $500 and $1,250, per person, depending on the circumstances.

As to the value of the perks, what is important is that it matches your lifestyle, which is why it's so important to really look at the perks your card has and not forget about them once you apply for them and start using your card. For instance, business credit cards tend to have as generous a rewards structure as personal cards do, but the benefits are likely to be more business oriented – like rewards on travel or office supplies, both of which might be rewards that a homeowner wouldn't necessarily benefit much from.

Of the perks that cardholders covet and do see as valuable, a few areas leap out. Over half (103) of Barclaycard Arrival Plus® World Elite Mastercard® cardholders reported that concierge services were "very valuable." That may say something about how overworked we all feel, that we recognize a relaxing oasis in an airport is very valuable, and somebody who can help handle the details that a concierge service will (like setting up restaurant reservations) can seem invaluable.

Smartly, cardholders surveyed for every card viewed fraud alerts and purchase protection among the top three most valuable features offered by their cards. In fact, 55% or more of cardholders for each of card called those perks "very valuable." This makes sense. Nobody wants to see their identity stolen or have a bunch of things bought on their cards (though you should remember that you're generally liable for no more than $50, even if a thief spends $10,000 on your credit card). And in an age when many people arguably feel that things just don't work as well as they used to, it's understandable that people would be excited about purchase protection (which also protects items when they're stolen).

We often think of reading the fine print as a chore, and with all the legalese in it, who can blame anyone for not diving right into a credit card's terms & conditions statements? But maybe we should start thinking of these terms & conditions as a treasure hunt. Because if you look and sift through all of those sentences crafted by well-paid attorneys, you may not find gold doubloons, but you may find some little nuggets of information worth its weight in them.

Methodology: In November and December 2018, CardRatings commissioned Op4G to conduct surveys among 200 users nationwide for each of the following credit cards: Capital One Venture Rewards Credit Card, Chase Sapphire Preferred® Card, Chase Sapphire Reserve®, Wells Fargo Propel American Express® card, The Platinum Card® from American Express, The Business Platinum Card® from American Express, American Express® Gold Card, Barclaycard Arrival Plus® World Elite Mastercard®, Ink Business Preferred® Credit Card and Capital One® Spark® Miles for Business. All participants were current cardholders who also reported credit scores of 670 or higher. Responses from users of each card were combined to allow comparisons between users of different cards. For analysis of valued features, the following point system was used: 1=Not valuable at all; 2=Not very valuable; 3=Not sure; 4=Somewhat valuable; 5=Very valuable.