If you’re starting a business, it’s inevitable you’ll make a few mistakes. Get egg on your face. Set up residency in Blunder City. To err is human. Well, you get the idea.

That said, if you can learn from other people’s mistakes, why not? And so we caught up with some business owners and asked them what they wish they had known before using their first business credit card. Not that they all made colossal errors in judgment. But like anyone starting out, they were new to the world of business credit cards, and it’s not surprising that some of them would have done things differently if they had the chance to do it again.

Labunski, the CEO of Rank Secure, an SEO and SEM digital marketing firm in Toronto, says his first business credit card was an American Express card.

“It was great because there wasn’t a limit, and we had a high volume of products to buy to start our business,” Labunski says. “The way it worked with our clients for payments, we were able to pay it off monthly. We also earned points, which was fantastic.”

But the euphoria was short-lived.

“The problem we had came when we had to move into a new place and had issues with the landlord fixing certain things,” Labunski says. “We fixed them by putting the charges on the credit card, expecting the landlord to reimburse us or knock it off our rent. He did not and left us hanging with thousands of dollars that must be paid off monthly with American Express.”

Labunski did not have that money. He scraped it up, but it wasn’t easy.

“The mistake we learned the hard way would be to make sure you have cash flow coming in to pay off any expenses monthly,” he explains. “That should go beyond the product to anything you use the card for. If you must use one for repairs or something other than a product, choose one that has flexible terms, so you have more options to pay.”

“So many cards now have tons of business features and that is a big change from when we started 18 years ago,” Labunski continues. “Choose a card that has the features your specific business needs, such as travel points, cashback on purchases, or one that is associated with a long-term, high-dollar lender. All of that can help you as you grow your business as well as save you money now.”

Lesson #2: You want to be careful about limiting yourself to one branded credit card

On one hand, plenty of people align themselves with one hotel or airline credit card precisely because they are happy with that brand. They love a particular hotel chain or airline and know that if they get the credit card, boy, are they going to get savings.

But teaming up with one brand isn’t for everyone. Ben Walker is the CEO and founder of Transcription Outsourcing, LLC, a transcription business based out of Denver.

“I’ve had a Chase United MileagePlus credit card for 10-plus years now and made one huge mistake, in my opinion,” Walker says. “I should have not tied myself to one airline by going with the Chase United Mileage Plus card because now I basically have to fly with United in order to keep my status and use my points. If I switch cards, I would have to start over for the most part, and I don’t fly enough to go with two airlines and get status with both.”

So obviously the lesson here, for Walker, is that he probably should have applied for a travel rewards credit card that wasn’t tied down to one brand. Keep in mind, though, that for other business owners, you may find that aligning yourself with a co-branded airline or hotel credit card is a good idea. You’ll need to consider your own business’ needs in order to decide.

Lesson #3: You don’t want to carry a balance

Sure, we all know that, and Rachel Lindteigen, president and founder of Phoenix-based Etched Marketing, a content and digital marketing agency that specializes in SEO, was well aware of that when she got possession of her first business credit card.

But she wasn’t as aware when she got her first personal credit card.

Lindteigen says that in her 20s, before she started her business and when she got her first consumer credit card, she began a habit of carrying revolving debt – about $5,000 was the highest she ever went. It took her awhile to see the light, that carrying revolving debt is a waste of money, and even longer to pay it all off. But she eventually did, which helped her when she did start using a credit card for her business.

“I like the rewards points and cash back, not paying someone 20% more for something,” Lindteigen says.

Lesson #4: Not analyzing that annual fee

Mark Chen is the founder and CEO of BillSmart.com, a Los Angeles-based negotiation service for credit cards and other bills. Chen’s first business credit card was CardNamediscontinued, which he got in 2019 and, at the time, had a hefty annual fee of $595 (It’s now AnnualFees; See Rates and Fees). American Express is a CardRatings advertiser.

He says that to offset the fee, he had to spend $5,000 a month, and one of those months, he put his parents’ utility bill on the card to reach the threshold.

“After the first year, I downgraded to the Amex Green card and currently use the [CardNamediscontinued] for the majority of my business spend,” Chen says.

Lesson #5: Not doing enough research on that first credit card

“Even though I’m pretty financially savvy, I assumed that the Amex [Business] Platinum card would be a credit card rather than a charge card,” Chen says. “Looking back, it would have been better to just go with the [Ink Preferred] card because it’s always good to have a revolving line of credit you don’t need to pay down every month,” Chen says.

Sounds logical, and like something nobody would do. Chen did it, however, when he put his parents’ utility bill on his card, and Jeff Moriarty did it, too. Moriarty is the owner of JMoriarty Marketing, a marketing firm based out of Plainfield, Ill.

“When I started my business three years ago, I also opened up a business credit card,” Moriarty says.

He had to spend $4,000 in the first three months to get the welcome bonus, which is a common ask of credit cards.

“Well, I thought, ‘Why not put everything on it?'” Moriarty says.

That sounds reasonable, but as Moriarty explains, “I got so used to putting everything on that card, that I continued to do it, even after hitting the bonus. Didn’t think it was an issue until the end of the year, and it was a mess for my accountant.

“Bottom line: Keep separate credit cards for your business and personal expenses. It will save you a ton of money and grief.”

Starting a business involves inherent risk, so avoiding pitfalls where you can is necessary. These business owners learned – sometimes the hard way – how to use small business cards as tools rather than letting those cards dominate their business’ finances.

See Rates and Fees for CardName 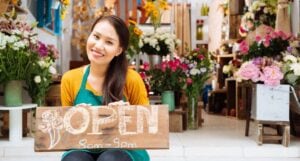 Can your business expenses affect your personal credit? How credit cards can help your business save on shipping costs 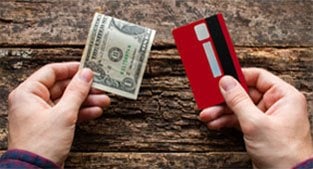