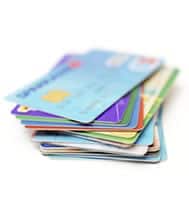 The Consumer Financial Protection Bureau recently reported that the average credit line, number of accounts and outstanding card debt are all on the upswing. There isn't quite as much credit card debt (yet!) compared to before the recession, but it's increased 9 percent over the past two years.

The already active credit card market will get another jolt when the tax cut goes into effect in 2018, which could mean more disposable income over the next year.

Economists and consumers are optimistic about 2018, but what can you expect for credit cards? Here are five things to watch in 2018:

Less signing when you make purchases

You've probably noticed that you don't have to sign for as many purchases you did just a couple of years ago. Credit card companies and businesses have lowered the hassle of signing after you swipe or insert your card. These policies are about making things easier at checkout.

And the "no-signing" trend continues to gain steam. American Express, Discover and Mastercard have all announced that they are doing away with signatures for domestic purchases (and, in some cases, for purchases abroad as well).

You're probably wondering: How will credit card companies prevent fraud if you don't have to sign? Well, first off, your signature at check out is likely a squiggly line anyway, so it's not exactly helping prevent fraud at present.

Plus, more and more shopping each day is done online where you don't sign for your purchases. And lastly, credit card companies have improved fraud prevention through better technology (see below for more on that) and customer alerts, so they believe the signature isn't needed anymore.

Not signing for your credit card purchases may seem off-putting at first, but once you get used to it in 2018, you'll likely not pine for the days of signing for those purchases.

EMV technology, which stands for Europay, MasterCard and Visa, is standard in other parts of the world, but Americans continue to occasionally swipe for purchases even if you have noticed a significant increase in the "insert your card" EMV technology closer to home in the past few years. The EMV technology can feature chip and signature or chip and PIN, which offers it a little bit of added protection.

EMV stores credit card data on a computer chip embedded on the card rather than on the magnetic stripe you're used to. Card readers that utilize chip technology don't need to be connected to a phone or the internet to approve the charge. That's different from the classic magnetic stripe card that continually communicates with the credit card company.

Chip technology is designed to change that stat.

U.S. credit card companies are moving more into EMV technology, though many are still in the chip and signature world with future plans to move into the chip and PIN world. Cayan reported that 73 percent of credit card purchases on Black Friday in 2017 were with chip technology. That's an increase from 55 percent in 2016. Credit card companies have issued 462 million chip cards to cardholders, and more than half of U.S. storefronts now accept cards with the technology.

The added fraud protection seems to be working. Visa reported that counterfeit fraud at U.S. chip-enabled merchants decreased 66 percent in June 2017 compared to two years ago.

If you don't have a card with chip technology yet, your credit card company could very well be sending you one in 2018. If you already have a chip card, be aware that your company could be moving in the chip and PIN direction very soon.

Credit cards are not just a tool to make purchases. In many ways, they've become a status symbol.

Credit card companies now offer special cards that set you apart from other consumers. Sure, plastic rewards cards are great, but metal cards can impress.

Beyond the look and feel, a metal card's benefits vary by card – just like plastic cards. Some metal cards specialize in travel rewards, while another might give cash back. Some have hefty annual fees, while others are more affordable.

Plastic credit cards remain more common than metal cards, but that's the point. Metal cards are meant to stand out.

Offering a metal card gives credit card companies another way to tempt top customers and high spenders. In many cases, the metal cards offer similar rewards and perks as regular plastic cards, but with the added benefit of a special card that will get a second look by store employees and friends alike. Furthermore, those metal cards just might hold up better in your wallet.

If you want a side of prestige with your credit card, you'll likely have more opportunities to get a metal card in 2018 if you're a top customer.

There was a time not too long ago when credit card companies were focused on fairly bare-bones balance transfer credit cards. The thought was that consumers interested in these cards solely cared about getting a temporary lower APR and maybe even not paying a balance transfer fee. It was great for consumers, but it meant that many of them just put the card in a drawer after taking advantage of that balance transfer offer – not exactly what credit card issuers want you to do with the card they send you.

Now, more companies are sweetening their balance transfer cards by adding rewards programs and perks and, in some cases, doing away with that pesky balance transfer fee. We saw this particular trend prove true early in 2018 when the The Amex EveryDay® Credit Card from American Express (This card is not currently available on CardRatings) announced it was lengthening its 0 percent intro period from 12 months to 15 months AND that it would offer a $0 balance transfer fee for transfers made within 60 days of account opening (Terms apply; . After the intro period, the APR becomes 12.99% - 23.99% Variable). At the same time, the card kept its reward structure: two-times the points at U.S. supermarkets (up to $6,000 spent annually, then one point) and one point per $1 on other purchases; further enticing cardholders to put that card into heavy rotation beyond the balance transfer is that using your card 20 or more times per billing period earns you 20 percent more points for that billing cycle.

Changes like this mean a win-win for consumers and credit card issuers alike. Suddenly that awesome rewards credit card that you want to use every day might also come with a sweet balance transfer or 0 percent interest deal as well.

With Americans feeling confident about the economy and spending more as a result, many consumers will likely look for ways to consolidate debt and pay a lower interest rate. Wouldn't it be nice to have a balance transfer card that allows you to do all that, but that you want to keep in regular rotation because of the rewards it offers? Keep an eye on your credit card terms in case something changes and don't be afraid to seek out a new card if the one you currently have just isn't meeting your needs anymore.

A better economy means more available money for consumers; therefore, look for credit card companies to offer more cards and added perks as they try to lure more consumers to their brand.

Despite credit card and technology company efforts, mobile payments remain a small percentage of credit card-related purchases. Companies will continue to look for ways to increase mobile payments in 2018. In fact, cardholders who activated the bonus categories for the second quarter of 2018 earned 5 percent back on up to $1,500 spent at grocery stores and on PayPal and Chase Pay® purchases. That comes after the first quarter in which they earned bonus rewards on Chase Pay®, Apple Pay®, Google Pay and Samsung Pay (in addition to some other categories). The information related to this credit card has been collected by CardRatings and has not been reviewed or provided by the issuer of the card.

More users have mobile wallet technology these days. For instance, Apple Pay® doubled its users in 2017 with one estimate saying the service could have reached 86 million customers by the end of the year. Starbucks also saw a 10 percent increase on its Mobile Order & Pay service in 2017. In fact, 30 percent of Starbucks payments in June 2017 were done via its mobile app.

Despite those numbers, mobile payments still are just a small portion of credit card payments.

However, as cardholders look to offer easier ways to use their credit cards and smartphones continue to play a larger part of our lives, look for credit card and mobile phone companies will continue to push mobile payment offerings in 2018.

What have you noticed when it comes to using your credit cards? Are you expecting a particular change or trend to emerge in 2018? Tell us in the comments!