Women in the U.S. are more likely than men to believe they have poor credit scores (16 percent vs. 10 percent), but the credit score reality in America doesn’t necessarily align with that perception.

A recent CardRatings survey among over 2,000 U.S. adults ages 18+ found that numerous factors may impact how Americans view their creditworthiness, but gender emerged as a particularly significant divide when it comes to credit score perception vs. credit score reality.

Men vs. women, seniors vs. millennials

The reality, however, doesn’t necessarily support that perception. A December 2015 study by credit reporting bureau Experian found that, on average, women have slightly BETTER credit scores than men do – 675 vs. 670. Still, neither the men’s nor women’s average score falls within the traditional “excellent” range, which suggests the disconnect between credit score perception and reality affects both women and men.

Why? It may be a matter of what someone considers “excellent” or “poor” credit or it could be an unwillingness to access this information in the first place and pervading income disparities in our country: In the survey, women were more likely than men to say their credit score was poor (16 percent vs. 10 percent, respectively). According to government data, women made up 51 percent of the workforce as of 2015, but weekly earnings for full-time female workers were still only 79 percent of men’s earnings as of 2014.

“Although a lack of fundamental understanding of how credit reporting and scoring work certainly is a significant factor, I think the more important reason that people imagine their credit to be worse than it is stems from their embarrassment at having made mistakes, especially when it comes to missing one or more payments,” Lynch said. “The overwhelming majority of consumers want to repay their creditors and are mortified when they can’t fulfill their obligation.”

The average credit score in the U.S. is now at an all-time high of 695, but age, education, geography, home-ownership and even being childless, in addition to the aforementioned gender differences, impact how Americans view their creditworthiness.

When it comes to age, the older you are, the more likely you are to believe that your credit is excellent. Americans ages 65 and older seem to be the most confident: 73 percent of this group describe their credit score as excellent compared to just 37 percent of 18- to 34-year olds. Millennials (ages 18-34) are more likely than older adults ages 65+ to describe their credit score as Limited/No credit history/score (14 percent vs. 0 percent) or say they are not sure about their credit score (10 percent vs. 4 percent). Adults who are not parents to a child under 18 are more likely than parents of children under 18 to believe they have an excellent credit score (56 percent vs. 40 percent) – possibly because they may not have the financial burden of paying for child care costs or college tuition bills.

The aforementioned numbers shouldn’t come as any surprise. Most seniors have had decades of work experience – the average American will retire in his or her early 60s – giving them plenty of time to build their earning power and hopefully learn from their financial mistakes. Millennials, who make up one-third of the workforce, have had to deal with crippling student loan debt. 2016 graduates came out of school with an average of $37,172 in debt, according to Student Loan Hero. Millennials have a median income in the $30,000-range and major life expenses (having a child, getting married and buying a home) potentially happening around this time period, so millennials may not have as big a shovel to dig themselves out of a financial hole. It should, then, come as no surprise that 14 percent of millennials say they have little or no credit history. The age disparity in how Americans view their credit correlates with other research that shows FICO scores tend to increase with age. In this regard, financial perception and reality probably are more aligned.

This particular perception may reflect reality. FICO scores often increase with income: those who earn 50 percent or less of the country’s median family income (about $52,000 a year) have a median credit score of 664 compared to 775 for families who earn 120 percent above the median family income.

“A person whose income increases can theoretically afford to pay more or all bills on time, which would positively impact their score. A raise in income would also allow a person to pay down his or her existing credit balances, which could also significantly improve their scores,” Lynch said.

“The real improvement in credit, when it comes to an increase in income has to do with a more traditional part of a lending decision: capacity,” he added. “If expenses and debts are unchanged, a raise in income also means an improvement in one’s debt-to-income ratio, which can be crucial in securing significant new credit.”

Perhaps even more interestingly, geography may impact credit score perceptions, too. Those who live in the Northeast are more likely than those in the South and West to think their credit score is excellent (60 percent vs. 47 percent and 48 percent), but those who live in the South are more likely than those who live in the North to think their current credit score is poor (15 percent vs. 9 percent). If you look at the states with the highest percentage of their populations with declining credit, many of them are concentrated in the South. South Carolina leads the pack with 20 percent of its population living with declining credit, followed by Mississippi (19 percent) and Alabama, Georgia and Louisiana (18 percent). 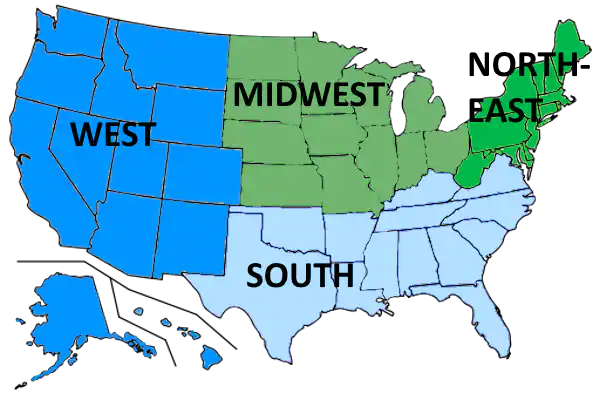 All of this may have something to do with the fact that six out of the top seven states with the highest median family income are all in the Northeast, according to Census data. Several factors account for a person’s credit score, including credit mix, credit utilization, credit history and new credit applications. Previous research has shown that many Southern states rank in the top 10 for credit card debt and for low credit scores, so it’s possible that lower incomes coupled with higher credit utilization ratios, and thereby higher debt-to-income ratios, affect financial perceptions in this region.

Most Americans carry a balance

The survey also highlights how Americans use credit. Sixty-seven percent of those who have a personal credit card say they carry over a balance month-to-month, and lower income may indicate to more debt: 83 percent of adults who have a personal credit card and whose households make less than $50,000 say they carry a balance compared to just 52 percent of households with six-figure or more earners. Among those who have a personal credit card, those who are not married are more likely than those who are married to carry a balance from month-to-month (72 percent vs. 64 percent), renters are more likely than homeowners to do so (81 percent vs. 60 percent) and parents of children under 18 are more likely to carry a balance than those without children under 18 (80 percent vs. 61 percent), as well.

The amount of debt varies. Fifteen percent of personal credit card owners say that, on average, they carry over a balance of less than $100 month-to-month, while 11 percent carry over a balance of between $2,000 and $4,999 on average month-to-month. More than four in 10 of those with a personal credit card (45 percent) say they pay off their credit card bill completely within the first billing cycle after making large purchases, but 11 percent say they always have a balance and aren’t able to pay off their credit card bills completely after making large purchases. This coincides with trends the Federal Reserve found when it surveyed Americans on their economic well-being. The report highlighted how income variability and the tendency of some households to consistently spend more than they earn increases the likelihood of debt. Nearly one-third of those surveyed for the Fed survey said they had variable monthly income and 42 percent of this group reported difficulty paying their bills on time each month.

Why? Research supports the notion that most people don’t leverage balance transfer offers because they know they lack the discipline to pay off the balance within the specified period. The fees for transferring a balance also may be prohibitive. One study by the market research firm Consumer Intelligence found that 34 percent of consumers who use balance transfers don’t pay off their balance during the 0 percent interest period. Lynch said this isn’t surprising.

“While taking advantage of 0 percent offers can be quite effective, it takes real discipline to use the grace period, typically 12 months, to pay off all of the balances transferred to the new account,” he explained. “After the grace period ends, a new interest rate will be applied, and the opportunity is over. If we do see consumers who tried and failed to employ this strategy properly, it’s because they failed to account for the transfer fee, they closed the accounts they were transferring balances from and they didn’t know that opening new accounts would ding their credit in the short term.”

As Lynch said, it’s not uncommon for us to “forget a thousand bills we’ve paid on time, but we remember our unmet obligations as if they were written in stone.”

If there’s one key takeaway here, it’s that knowledge inspires action and that in turn financially empowers consumers.

This survey was conducted online within the United States by Harris Poll on behalf of QuinStreet, CardRatings parent company from Sept. 21-23, 2016 among 2,008 U.S. adults ages 18 and older among which 1,555 have personal credit card(s). This online survey is not based on a probability sample and therefore no estimate of theoretical sampling error can be calculated. For complete survey methodology, including weighting variables, please contact Brad Bennion.